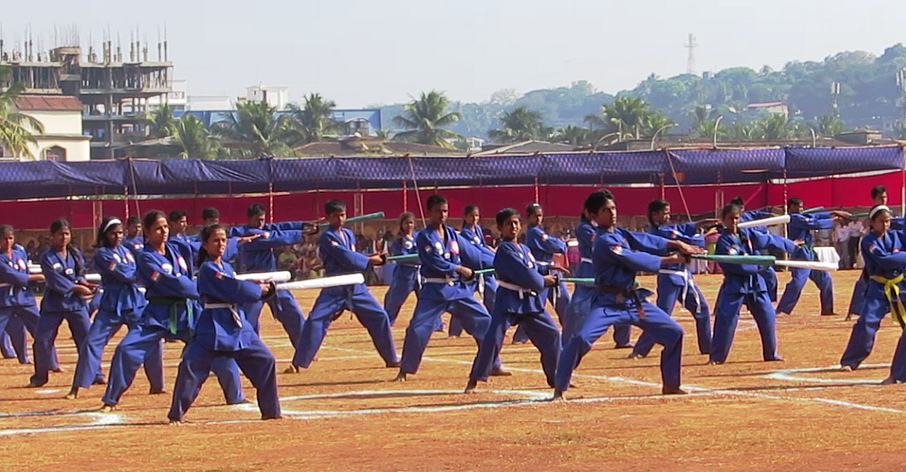 Sqay is a South Asian martial art created by the Kashmiri people of the former state of Kashmir. It is today practiced mainly in what are now Azad Kashmir in Pakistan and the Kashmir Valley in India. Armed sqay makes use of a curved single-edge sword paired with a shield, while unarmed techniques incorporate kicks, punches, locks and chops.

This rule book belongs to International Council of SQAY Martial Arts and its related units. These rules shall also be applicable to School Games competitions.Players have to compete with weapons known as “TURA” which is a Synthetic Fiber Stick covered with soft leather and a shield which is made by soft leather. SQAY (Martial Art) is the art of Physical, Mental and Spiritual Education. Body exercise and training in self defense and sports that aims at infusing habits which will be beneficial through life and is useful both for individual as well as for the nation.

SQAY is a practical fighting technique, a formal method of physical and mental training and competition combat sports. Contest of SQAY Martial Art are held at Sparing matches in which some SQAY Techniques are not permitted and only a few are used very often.

To avoid injuries all such Tura blows, strikes and kicks are controlled and pulled back after light contact to the body

EVENTS  LOBA  (FIGHT)
Officials and their duties:   For conducting a match, the required official penal is
1. One centre referee in the central of arena
2. One Asst. Referee in the centre of Arena
3. One Chief Jury / Judge
4. One Scorer
5. One Asst. Scorer
6. One Record Keeper
7. Arbitrator

CENTRE REFEREE: The centre referee will start the bout and indicate the point by signaling and calling the scorer for points and side, indicating by his hand control the bout during play.

ASST. REFEREE The Asst. Referee will also be in the center of the Arena and will assist the Centre Referee by indicating the points.

CHIEF JURY / CHIEF JUDGE: The Chief Jury / Chief Judge is the head of Referee panel and if there is any dispute between Centre Referee and Asst. Referee the decision of Chief Jury will be the final. Call the competitor to the Arena and decide the timing of the bout.

SCORER:The scorer has to fill up the score in the score sheet for record of the match.

ASST. SCORER: The Asst. Scorer will write the score on the score board.

RECORD KEEPER The record keeper has to keep all the records of the bouts and also to verify the eligibility certificates of the participants.

DURATION OF BOUT A bout (match) for Under 14 Boys and Girls. Under 17 Girls and Under 19 Girls is of 3 minutes but it will be extended up to five minute in case of no score or tie. For under 17 boys and under 19 boys the duration of Bout (Match) is 5 minutes it can be extended up to 7 minute in case of no score in Extra time, the match will be decided by sudden death.

SUDDEN DEATH:In sudden Death Method one who scores the first point is the winner of the match. The duration for the sudden death is 1 minute for under 14 boys and girls and under 17 girls, under 19 and under 17, under 19 boys. The duration of 2 minutes if both the players will not score then the decision will be given by Referee?s and Chief Jury for that contestant who has attached much time with perfect techniques.

Scoring is using during recognized competition. SQAY Techniques in good form, on the permitted scoring area on the opponents body. Actual physical contact is strictly limited and is not required for scoring. Light contact is permitted on the body only very light contact is permitted on the face and head. Points can be awarded for controlled techniques having a force within to in of the target surface excessive physical contact always result in disqualification.

1. DRE: A DRE is awarded for a blow that strike with good form, good attitude, strong vigor, constant alertness of mind, proper timing and correct distance.

2. DHA: A DHA is awarded for a blow that is less correct but still effective, for example the opponent is moving away from the below, the below is slightly off target, the below is delivered from an unstable position.

3. YAW: A YAW is awarded for a Tura strike which will be perfect on target with pull back at right time.

4. KAKODAY: A KAKODAY is given if a player goes outside the arena during the fight.

5. TURA AFTAUSHWA: A TURA ARTAUSHA is given if the Tura or the shield falls from the hands of the player.

6. MUKO: A MUKO is given to a player ignores the word of Referee or broking the rules and regulations of the game or by leaving the arena without the permission of the Referee. Then the referee gave warning to a player by saying MUKO.

7. DASIMUKO: If a MUKO is given again to a player two times and player commits again foul the Referee says loudly DASI MUKO means strong warning.

8. OWAZA: If a DASI MUKO is given again to a player and he repeats the foul then the Referee will say OWAZA meaning disqualify. Then the player is out from the tournament and the player cannot participate in this tournament in any category.

10.  NO POINTS: No point is awarded if an attacker fails to deliver blow the moments he/ she seized or thrown his opponent two opponents score simultaneously, no point is counted Scoring techniques delivered simultaneously with the end time seized or counted, as are techniques delivered if attacker is inside the match area but his opponents is outside.

PENALTIES:
A foul may result in private warning of the referee voice (MUKO) public warning by the referee in a loud voice (DASI MUKO) disqualification, announced by referee (OWAZA)

FOULS:
The following are the fouls:-
1. Direct attacks to the body other than the arm?s and legs.
2. Dangerous techniques, such as blows to the eyes or testicles.
3. Dangerous strikes by Tura or kick.
4. Direct attack on skin.
5. Direct attack on the hips, knee joint or insteps.
6. Excessive moving out of the match area or wasting time.
7. Ignoring contesting rules.
8. Un-sportsman like behavior.
9. Hitting with the elbow or grip of TURA
10.Striking a competitor when he is down.
11.  Throw the TURA or shield directly on the ground.
12.  One who argues with the referee
13.  One who misbehaves with the referee
14.  On who neglect the words of the referee
15.  One who fouls or breaks the rules of the championship.
16.  One who gives thrill to opponent by crazing.

DISQUALIFICATION:
Centre referee has the power to disqualify any player if he / she fails to obey the referee becomes over excited to the excellent of being considered a danger to his opponent, breaks match rules with malicious intent, or breaks match rules in some other way. If he / she neglect the word of referee if he / she breaks any rule of the competition or doing any kind of fault during the fight.

PROTEST:
1. No one may protest personally to the arbitrator referee or Judge about their judgment. Referee decision is final.
2. Player cannot lodge any protest. In case of any misunderstanding between the referee the manager or coach can lodge a protest.
3. The protest should be lodged in writing after the end of bout within 30 minutes.

TIME OUT:
There will be no time out during the bout except the official time out.