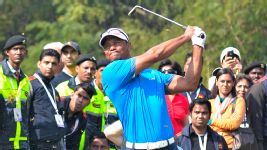 For those who witness it frequently, who are there to see the constant hustle and bustle that surrounds Tiger Woods in public, the spectacle is almost taken for granted.

For what Tiger Woods said was supposed to be a private event at Delhi Golf Club, he received a reported $2 million appearance fee, attracted several thousand fans and made front-page news for his first golfing trip to India. Reuters
The crowds are enormous, the security is ramped up and the media horde crams inside the ropes, sometimes blocking the view of fans straining to see him. Spectators shout his name, kids beg for autographs, and the scene plays out again and again.

Woods is more than used to this by now, almost numb to it. For 18 years, this has been his life at golf venues, and while the “Tiger Mania” of the early days might have long ago subsided, it is still, well … mania.

And yet, even Woods, who has seen just about everything, couldn’t help but be moved by the reception he got last week during his first visit to India.

What was originally billed as a small corporate exhibition became the talk of Delhi and, to a certain extent, the country — one that boasts 1.2 billion people.

“The people were so excited; they came out in droves,” Woods said in a telephone interview with ESPN.com. “We had a bunch of fun, thousands of people out there. It was supposed to be a private deal but it got to be a lot more than that. I played well and everyone just loved it.”

Woods is not typically one to speak in such reverential tones. This is work after all, and to be clear, he was being paid a hefty sum to be at Delhi Golf Club — a figure reported in excess of $2 million by several India media outlets.

Truth is, this at one time appeared to simply be a huge 18-hole payday, a shrewd move by Woods’ agent, Mark Steinberg, to piggyback a corporate day on the back end of another financial windfall at the European Tour’s Dubai Desert Classic. Already half way around the world, what’s another couple of hours to India?

But while Woods was playing the Dubai tournament, it became clear that this side trip to India was a bit bigger than purported. Several India media representatives were in attendance at Emirates Golf Club, and Woods fielded questions about the visit after each of his rounds. There was a keen level of anticipation.

“The excitement to watch Tiger play before my eyes had taken a toll on my sleep,” wrote Rohit Bhardwaj in the Times of India. “Finally I got the moment I was waiting for — I saw Tiger walk majestically on the fifth green, with a huge crowd close behind jostling for space and a chance to capture him on their smartphones.”

All for an otherwise meaningless exhibition.

“I haven’t seen so many people on a golf course, ever in India,” said Sharmila Nicollet — the top female golfer in India who attended and played several holes alongside Woods — via email. “It ended up being quite chaotic, but then they were getting to see Tiger Woods, after all. I guess it will always be hard to contain excitement when a player of this magnitude visits the country. Hats off to the organizers who still managed to keep the crowds in check.

“It put golf on the front pages for a few days, which has never been the case before. Also, kids who were there, or who read about this event, may be more encouraged to take up golf. He is an absolute superstar and his visit made golf cool in India. We all grew up having idols but when you get to see yours up close, it makes a big difference.”

V. Krishnaswamy, a journalist who writes for several Indian outlets, attended and said he was only on the invite list because of an affiliation with the Delhi Golf Club. Media representatives were not supposed to be present, but many showed up anyway to report on what became a top story. An estimated 5,000 spectators lined the fairways.

Woods was the guest of Pawan Munjal, the CEO of Hero Motocorp, a big supporter of sports and golf in the country. Hero makes more two-wheelers than any company in the world, and Munjal is big on the high-end pro-am golf circuit. He annually attends the Masters and played alongside Woods for all 18 holes after inviting the No. 1 golfer in the world to his home for dinner the previous night.

It didn’t hurt that Woods played some pretty impressive golf on the old-style course, which has hosted 26 Indian Opens, a tournament on the Asian Tour. Woods said it was the narrowest course he had ever played. “If you missed a fairway, you were in the brush,” he said.

In the first 15 holes, Woods, 38, made 10 birdies and a bogey. For the final three holes, an alternate-shot skins format was used. Along the way, various golfers from the country were allowed to tee it up for a few holes, including Nicollet, 22, who played on the Ladies European Tour the past two years.

“The whole idea there was to never let her beat me on a hole,” Woods joked. “I did have a little bit of a competitive side.”

“I liked his focus, and his physical and mental strength,” Nicollet said. “He seemed to have every kind of shot in his bag, which for me was quite a learning experience. It has given me some clarity with respect to the kind of dedication and hard work that one needs to put in to get to the top and more importantly stay there.”

And so went the theme of the day. Constant chants from spectators. Cries of “Welcome to India.” A once-in-a-lifetime opportunity.

“What resonated so much with me was the crowd and the frenzy that was around,” Steinberg said. “The sheer joy and excitement that he came to their country. And the locals saying that what Tiger did in Delhi, India, will do as much for golf as anything they’ve seen. There were young kids, 5, 6, 7 years old. Teenagers, young adults, people 50, 60, 70 years old. When you hear what it meant to have Tiger Woods come to their country and show that respect, I think it’s cool to see.”

Steinberg admitted the visit started out simply as a business arrangement. Growing Woods’ brand. Exposing him to other markets, as he has done throughout his career in such places as Australia, China, Japan, Malaysia, the United Arab Emirates, Turkey, etc. Doing right by his various sponsors.

Woods commands a hefty fee for such appearances — he embarked on a weeklong journey to Asia last fall, for instance — but this one seemed different.

Long-time friend Arjun Atwal, the first Indian player to win on the PGA Tour, has been nudging Woods for years to visit. Jeev Milkha Singh, the first golfer from India to play in the Masters and winner of three European Tour events, had also lobbied Woods.

“People are warming up to golf,” said Woods of India, a country with fewer than 200 courses. “They are starting to understand the sport. Nothing is as big as cricket. Or soccer. But the golf community in India is growing extraordinarily fast. They’re producing pros. They’re now growing a base of golfers. In the next 20 years or so, it’ll be amazing to see how many Indian golfers will be part of the European Tour and then coming over here.”

Nicollet acknowledged that the game has a long way to go, and that it is plagued by many of the issues Americans face: access, cost and time to play.

“Initiatives like this visit will give the game a boost, but lots of work is ahead of us,” she said.

A skeptic might wonder about Woods’ motives here, if he’s really buying his own amazement. It’s a fair question, given his seeming lack of interest — at least publicly — in such endeavors. And yet that’s the point. Woods could have moved on, cashed the check, said little or nothing. This time, he spoke, and did so glowingly. To media on site. On Twitter. And now again some 10 days later.

“The media coverage was terrific,” Nicollet said. “I haven’t seen any golf event in India that had similar coverage. People [who] wouldn’t care about golf otherwise would have been aware of this visit and would have been curious. It was front-page news, and that is great for golf.”

Woods has never shied away from talk about growing the game globally, and nobody has done more in that regard since the rise of Arnold Palmer simply by being such a popular and prolific winner.

To be sure, Woods has his share of detractors. His popularity waned after the disclosure of his 2009 personal issues, and some have never forgiven him his indiscretions. It has almost become cliché for some to doubt Woods’ efforts to expand on his 14 major championships and continue the pursuit of Jack Nicklaus’ 18 major championship record.

But such disdain is rarely, if ever, on public display. Woods attracts the biggest galleries, the most attention, creates the biggest buzz wherever he goes in golf.

That was evidently on display in India, where a place so far away became a reminder — even to Woods — of just how big he remains.