What’s the difference between powerlifting, olympic weightlifting and strongman? 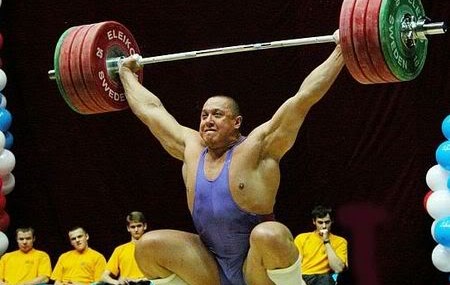 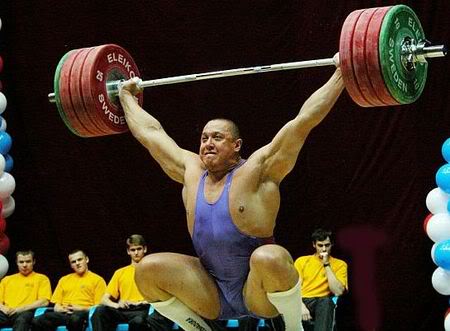 The short answer
I have been asked this question many times! The quickest way to explain is to describe the events, as anyone who is interested enough to ask has probably seen some in action:

Powerlifting is the squat, bench press and deadlift.
Olympic weightlifting is the snatch and the clean & jerk.
Strongman is a variety of events such as atlas stones, farmer’s walk, log clean and press, carrying/loading medley.
So much for the 30 second answer. But there’s much more to it than that!

What are powerlifting, weightlifting and strongman and why do people care?
They are all strength sports. You can do them competitively or just do them in the gym. In fact many studio gyms, Crossfit affiliates and internet gurus now regularly feature moves and skills from these sports in their programmes (such as power clean or farmers walk) and naturally people are curious as to where they come from.

Incidentally these are not the only strength sports. Others include all-round weightlifting, highland games, grip, arm wrestling, girevoy sport (kettlebells) and the heavy athletics events of hammer, shot put, discus, javelin and weight pentathlon (although these are also in their own category of ‘throwing sports’).

You won’t see any of these on television in the UK however as the British media is obsessed with team sports, motor sports and running (and once every four years the ‘sitting down’ sports of cycling, rowing and sailing). But that’s a rant for another time… [Update: since this post was written, strongman is back on terrestrial TV in the UK, hurrah! ]

What about bodybuilding?
Bodybuilding involves lifting weights, but the goal is aesthetic, not a performance goal. The competition is about who has the most pleasing physique, not who is the strongest or fastest.

So the lifts are different – what else?
These sports test different types of strength. Powerlifting tests absolute strength as the bar is moved a relatively short distance in a relatively uncomplicated manner, making these events the heaviest in terms of poundage.The powerlifting events are sometimes referred to as the slow lifts, because you simply have to move a weight from point A to point B in whatever time it takes. Sometimes the lift can grind out for several seconds.

In olympic weightlifting the bar must be moved at speed. The bar starts on the floor and is pulled up to waist height but then the lifter must drop under the bar at speed in order to catch it overhead. For this reason olympic weightlifting has the reputation of being the most technically difficult of the three sports.

In strongman, all types of strength are tested – strength, strength-speed, endurance, grip, even cardiovascular conditioning, over a full day of several events. Usually the winner is the competitor who is the most consistent, the best all-rounder.

Don’t you have to be huge to do powerlifting, weightlifting or strongman?
Chen Xiexia 48kg female weightlifter
Chen Xiexia of China, under 48kg gold medal winner in Beijing

No, not at all. They are all weight class sports, like boxing or martial arts, so it doesn’t matter what weight you are, you will fit into one of the categories. As an example, in weightlifting the women’s categories start at under 48kg, and the men’s start at under 56kg.

Strongman is a bit different. It used to be that competitions were just ‘open’, i.e. no weight classes. However weight classes such as under 105kg and under 90kg have been introduced, giving the lighter guys a chance to be competitive. Strongwoman still tends to be ‘open’ but there have been under 75kg competitions [Another update: these days you’ll find weight classes in strongwoman too; a popular split is -63kg, -75kg and Open].

How do you learn these sports?
With all of these sports, you will progress better with a coach and training partners, just as in any sport. In the UK, there are many gyms which specialise in one or more of these sports. They don’t advertise in the way that chain gyms do, so you might think they don’t exist. But they are there – in fact, I am willing to bet there is at least one in your town!

Any decent powerlifting, strongman or weightlifting gym will have experienced lifters – usually the owner of the gym and the regulars – who will be happy to show a newcomer the ropes and find a group for them to train with.

Don’t worry if you feel that you are ‘not that strong’. Experienced lifters don’t look for great strength in newbies; they look for attitude and work ethic.

There are also many online resources, including this website! I have a range of articles on lifting technique and many stories of my experiences in competitive strength sports. There’s also a list of useful links at the bottom of this post.

Can you learn olympic weightlifting from videos?
Yes and no. You can learn enough to get started and have a bit of fun – and often that is all people are interested in. But you need a real live coach to learn the lifts properly.

It’s a sport in which you need a lot of feedback on your movement, particularly in the early stages. Watching a video will tell you what the movement should look like and give you some drills but it will tell you nothing about what you are actually doing. Which might be some way from the video!

A full-length teaching video such as Dan John’s ‘Olympic Lifting for Beginners’ is the best option if you don’t have access to a coach or club.

Here are some ideas to get you started: olympic weightlifting – starting out

What about elite competition?
If you want to win an Olympic medal you will need to take up weightlifting as that is the only one that is currently an Olympic sport. Athletes with a disability compete in Paralympic powerlifting, which is the bench press only.

Globally, olympic lifting is the best organised sport as it has a single international federation, the IWF. Each country has a national governing body. In the UK, this is BWLA. If you want to get into competition, compete nationally and perhaps even represent your country, you will need to join your national federation and start lifting in their competitions.

Powerlifting has a glut of international federations; most people compete in one, maybe two. So there’s no single powerlifting competition where all the world’s best powerlifters lift against each other (apart from paraylmpic powerlifting). In your country, there may be several federations. I’ve lost count of how many there are in the UK – it’s at least five!

Strongman has no single international federation either, but the World’s Strongest Man brand is the best known competition. There are others though, including the Arnold and Fortissimus. In the UK, most strongman competitions are put on by individuals and you don’t have to be a member of a club or federation to compete in them. You just put your name down and pay the entry fee.

How do I get involved?
Like any sport, the best way to get involved is to find a local club and join it. Strength sports are minority sports in the UK, so don’t be surprised if you have to dig around for information or travel a bit further to find your nearest club. The upside is that you’ll probably be welcomed with open arms – all minority sports love new members!